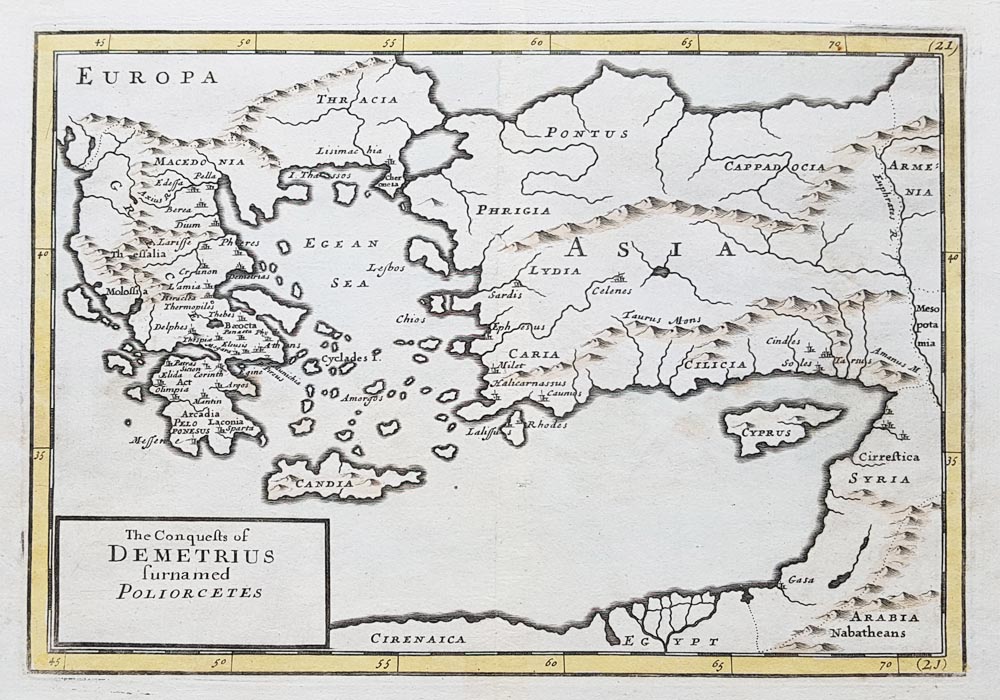 Publication: Geographia classica: 'The geography of the ancients so far describ'd as it is contain'd in the Greek and Latin classicks, in twenty-nine maps of the Old World and its several Kingdoms and Provinces: Wherein the chief Places mention'd in Homer, Virgil, Ovid, Lucan, Eutropius, Cornelius Nepos, Justin, Quintus Curtius, Sallust, Livy, Caesar, Plutarch, Xenophon, Herodotus, and many other Ancient Authors are describ'd. To which is added, a Map of the Places mention'd in the Old and New Testaments. A collection long wanted, and now publish'd for the use of schools, London, Printed for C. Browne, MDCCXVII.'

Description: Historical and retrospective map of South East Europe and Asia Minor featuring Greece, Crete, Albania, Macedonia, Turkey, Cyprus, Syria and Northern Egypt. Demetrius I (337–283 BC), called Poliorcetes ("The Besieger"), son of Antigonus I Monophthalmus and Stratonice, was a Macedonian Greek nobleman, military leader, and finally king of Macedon (294–288 BC). He belonged to the Antigonid dynasty and was its first member to rule Macedonia.