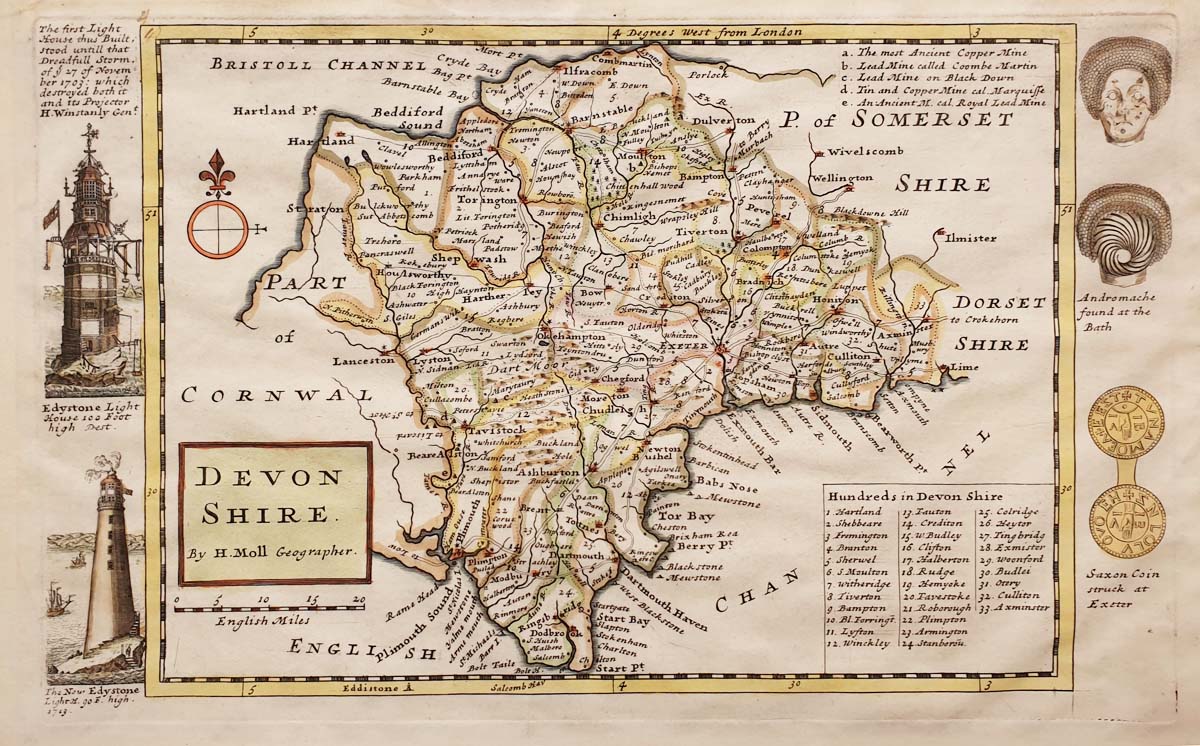 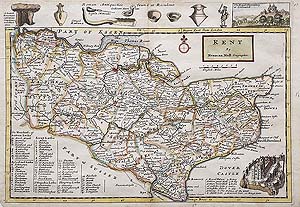 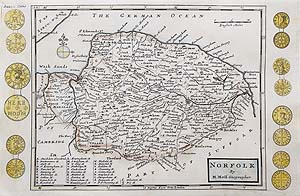 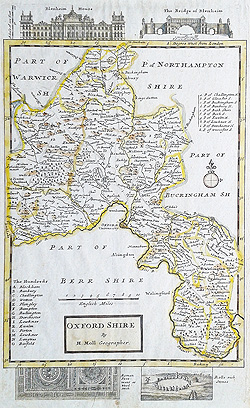 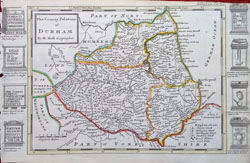 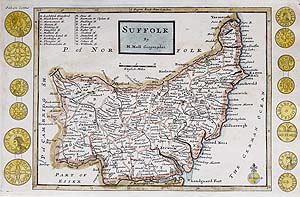 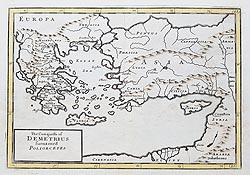 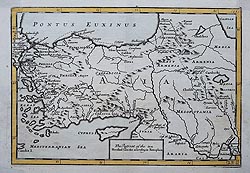 Asia Minor.
The Retreat of the ten Thousand Greeks according to Xenophon.
Herman Moll
c. 1717
£75.00 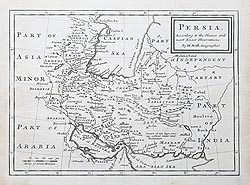 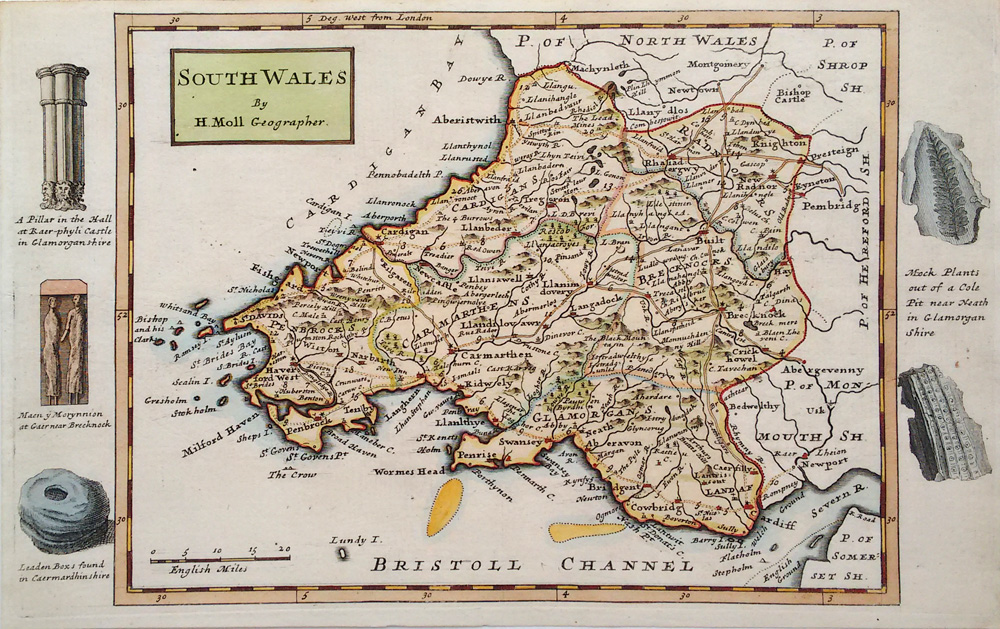 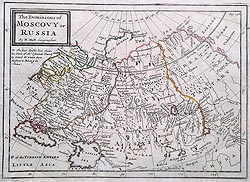 Russia, The Dominions of Muscovy or Russia
Herman Moll
£85.00 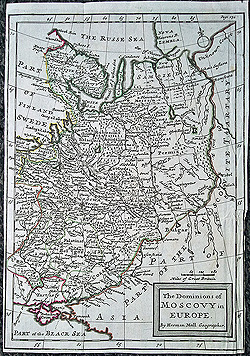 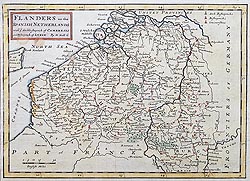 Flanders - Spanish Netherlands
with ye Archbishoprick of Cambresis and Bishop of Lyege
Herman Moll
circa 1700
£65.00

Originally believed to be Dutch engraver, Moll's exact place of origin is unknown, although his birth year is generally accepted to be the year 1654. He came to England about 1678 and by the end of the seventeenth century had set up his own business and become a leading geographer and publisher. He produced many maps of all parts of the world, ranging from roads to continents and was associated with Greenville Collins and John Seller. He produced maps from his studies of the work of other cartographers. Due to his important work in Netherlands' cartography and the fact that he undertook a journey in his late years on behalf of the Netherlands, it is assumed he originated from Amsterdam or Rotterdam. The name, "Moll" occurred not only in the Netherlands however but also in the northern part of Germany.

1701 - he published A System of Geography, the first of his own publishing. Despite containing very few changes in the presentation from his previous work, it helped establish him as a independent cartographer. In the coming years this atlas became increasing influential on contemporary cartographers and publishers and they were frequently copied and re-issued. In the years that followed he brought out several volumes including Fifty-six new and accurate maps of Great Britain, a book of maps of the British Isles. Then came The Compleat Geographer which was an update to A System of Geography. He issued forty-two monochrome maps designed without the usual text, as by not using his usual colours he could produce them at significantly less expense than comparable works, and went through many new editions.

1711 - began his Atlas Geographus, which appeared in monthly deliveries from 1711 to 1717, and eventually comprised five volumes. This included a full geographical representation of the world in colour maps and illustrations. Moll's subscribers.

As with his earlier works, the Atlas Geographus was eagerly copied and imitated. In 1710 he began producing artfully crafted pocket globes . These were each a pair of globes, with the larger, hinged celestial globe encircled a smaller globe. On the latter he often included the route of Dampier's circumnavigation. These globes are considered to be very scarce. 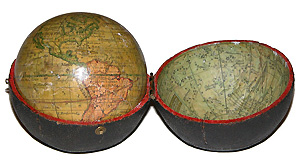 1715 - issued The World Described, a collection of thirty large, double-sided maps which saw numerous editions. In these maps Moll's skill as an engraver is particularly clear. These were bound separately and then later sold in the form of atlases in a joint venture between a number of other publishers. The series included two of the most famous Moll maps: A new and exact map of the dominions of the King of Great Britain and To The Right Honourable John Lord Sommers and This Map of North America According To Ye Newest and Most Exact Observations. These were distinctive for their elaborate cartouches and images, and are known respectively as the Beaver Map and the Codfish Map.

As with much of his work, Moll used these maps to publicize and support British policy and regional claims throughout the world. The Codfish Map shows in its cartouches a scene from the cod fisheries off Newfoundland. Since the beginning of the 16th Century the cod fishery there was an important economic factor for the European colonial powers. At the time of issue, the battle over fishing rights was one of the central points of contention in the North American policy of France and England. With its depiction of the processing of freshly caught cod for shipment to Europe, Moll highlighted for subscribers and viewers the importance of this sector for his native England. He labelled the Atlantic Ocean as the "Sea of the British Empire" and stressed that the British claims to fishing rights off the coast of Newfoundland. In a West India map from the same series, he wrote in the southwestern corner of Carolina, the words "Spanish Fort Deserted" and "Good Ground". On many of its North American maps - including at the Beaver Map - he drew particular attention to major ports streets, because he knew that was a sufficient infrastructure detail, communicating that for the further expansion of English is very important.

1724 - Publication of A New Description of England and Wales 1724. (Also Known as - A set of fifty New and Correct Maps of England and Wales 1728). This set of county maps similar to Robert Morden's smaller maps which he had revised. They are however distinctive for the inclusion of antiquities engraved in the margins, other publishers later copied these embellishments.

According to his obituary in the Gentlemen's Magazine, he died on September 22nd, 1732.

Works:
His work varied from miniatures to very decorative large maps as well as atlases. His work enjoyed a high reputation, much of it copied from other publishers.