Back to: Asia | Russia 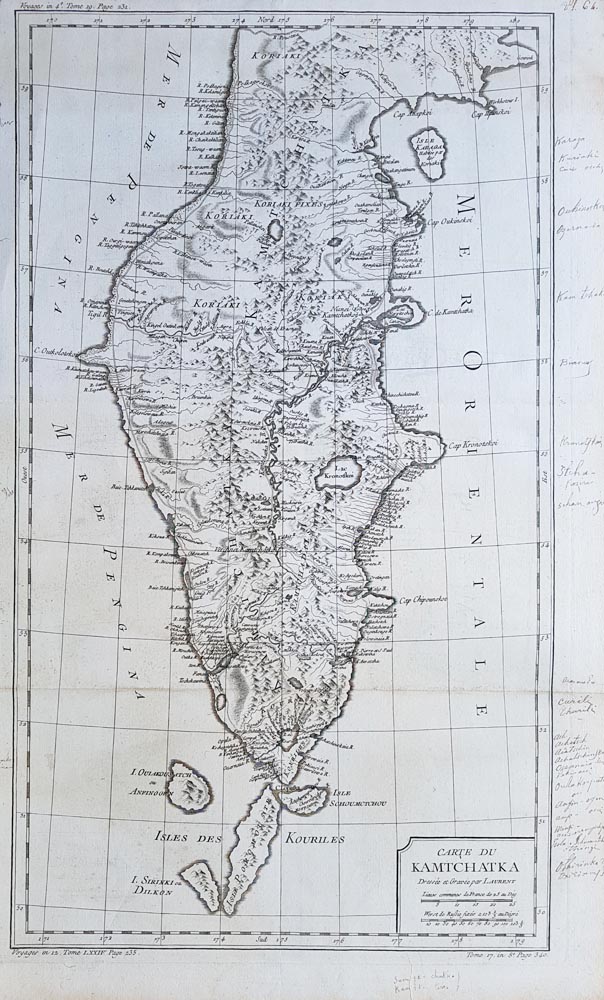 Bellin spent over fifty years at the French Hydrographic Service where he was appointed the first Ingeniuer hydrogrographe de la Marine. During his time there he was commissioned to carry out major surveys, first of the coasts of France and later all the known coasts of the world. This resulted in production of a large number of sea charts of the highest quality which appeared in many editions with varying numbers of charts to the end of the century.

He was appointed Hydrographer to the King and was a member of the Royal Society in London.
Atlases by Bellin include:

History
Muscovite Russia claimed the Kamchatka Peninsula in the 17th century. Ivan Kamchaty, Simon Dezhnev, the Cossack Ivan Rubets and other Russian explorers made exploratory trips to the area during the reign of Tsar Alexis, and returned with tales of a land of fire, rich with fish and fur. In 1697, Vladimir Atlasov, founder of the Anadyr settlement, led a group of 65 Cossacks and 60 Yukaghir natives to investigate the peninsula. He built two forts along the Kamchatka River which became trading posts for Russian fur trappers.

From 1704 to 1706, they settled the Cossack colonies of Verkhne- (upper) and Nizhne- (lower) Kamchatsky. Far away from the eye of their masters, the Cossacks mercilessly ruled the indigenous Kamchadal. Excesses were such that the North West Administration in Yakutsk sent Atlasov with the authority (and the cannons) to restore government order, but it was too late. The local Cossacks had too much power in their own hands and in 1711 Atlasov was killed. From this time on, Kamchatka became a self-regulating region, with minimal interference from Yakutsk. By 1713, there were approximately five hundred Cossacks living in the area. Uprisings were common, the largest being in 1731 when the settlement of Nizhnekamchatsky was razed and its inhabitants massacred. The remaining Cossacks regrouped and, reinforced with firearms and cannons, were able to put down the rebellion.

The Second Kamchatka Expedition by the Danish explorer Vitus Bering, in the employ of the Russian Navy, began the "opening" of Kamchatka in earnest, helped by the fact that the government began to use the area as a place of exile. In 1755, Stepan Krasheninnikov published the first detailed description of the peninsula, An Account of the Land of Kamchatka.

The Russian government encouraged the commercial activities of the Russian-American Company by granting land to newcomers on the peninsula. By 1812, the indigenous population had fallen to fewer than 3,200, while the Russian population had risen to 2,500. In 1854, the French and British, who were battling Russian forces on the Crimean Peninsula, attacked Petropavlovsk-Kamchatsky. During the Siege of Petropavlovsk, 988 men with a mere 68 guns managed successfully to defend the outpost against 6 ships with 206 guns and 2,540 French and British soldiers. Despite the heroic defence, Petropavlovsk was abandoned as a strategic liability after the Anglo-French forces withdrew. The next year when a second enemy force came to attack the port, they found it deserted. Frustrated, the ships bombarded the city and withdrew.

The next fifty years were lean ones for Kamchatka. The military naval port was moved to Ust-Amur and in 1867 Alaska was sold to the United States, making Petropavlovsk obsolete as a transit point for traders and explorers on their way to the American territories. In 1860, Primorsky (Maritime) Region was established and Kamchatka was placed under its jurisdiction. In 1875, the Kuril Islands were ceded to Japan in return for Russian sovereignty over Sakhalin.

The Russian population of Kamchatka stayed around 2,500 until the turn of the century, while the native population increased to 5,000. World War II hardly affected Kamchatka except for its service as a launch site for the invasion of the Kurils in late 1945. After the war, Kamchatka was declared a military zone. Kamchatka remained closed to Russians until 1989 and to foreigners until 1990.
Bibl. Wikipedia