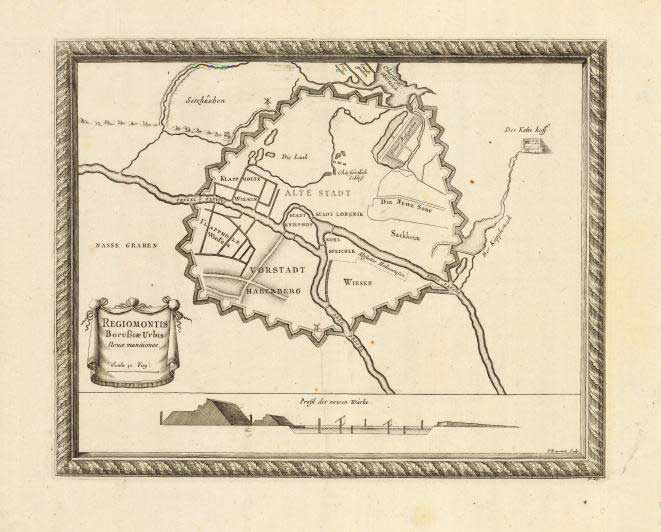 Description: 17th century plan of Königsberg which is present day Kaliningrad in Russia, with the profile of the new works. Engraving by La Pointe.

Decorative plan of two fortified locations along the fjord, including Hals. The Baltic features sailing ships and a compass rose. Plain title cartouche and elaborate frame borders. A view from Pufendorf's chronicle on The Northern Wars and military campaigns of Sweden's King Charles X.

Most plates are signed as drawn by Erich Iönson Dahlberg.

Was the capital of eastern Prussia from the Late Middle Ages until 1945. It was founded by the Teutonic Knights just south of the Sambian peninsula in the year 1255 AD during the Northern Crusades and named for King (German:König) Ottokar II of Bohemia. The city successively became the capital of their monastic state, the Duchy of Prussia, and East Prussia.

The Baltic port developed into a German cultural centre, being the residence of, among others, Richard Wagner, Immanuel Kant, E. T. A. Hoffmann, and David Hilbert. Königsberg was heavily damaged by Allied bombing in 1944 during World War II and was subsequently conquered by the Red Army after the Battle of Königsberg in 1945. The city was annexed by the Soviet Union according to the Potsdam Agreement and largely repopulated with Russians, it was renamed Kaliningrad in 1946 after Soviet leader Mikhail Kalinin.