In line with the Government directive our high street gallery is closed until further notice. HOWEVER, we are continuing to sell our maps and framing online (as long as Royal Mail and UPS are functioning). Order as normal, or if you require any advice call 07443 484594

Below are some of the main techniques which have been used for the production of maps and charts over the last 500 years.

The Latin term intaligo which means incise,applies to the printing techniques which result in the
image being created below the surface of the plate. The material used for forming plates up to
the early 19th century was copper sheet, this diminished after the the invention of the
more economic mild steel. So to engrave literally means to incise furrows or grooves on a
copper or steel plate with the use of a graver or burin.

The Technique
The engraver worked with the lozenge shaped tool called a graver or burin,
rotating the plate as he worked. The lines were incised into the plate with varying widths
and depths by altering the angle at which the tool met the plate and the amount
of pressure exerted on the handle. Differing tones were achieved by changing the
space between the lines, closer together gave a darker area. Cross hatching also
produced tonal and textural effects as well as providing a more three dimensional image.

Lithography or printing on stone (lithos - Greek for stone) was invented in 1798 by the Czech, Aloys Senefelder. This is a surface or planographic method of printing and relies upon the the principle that water and oil do not mix.

A drawing is made on limestone using a greasy crayon or pencil, the stone is then treated with acid, gum arabic and water so that when ink is applied from a roller it adheres to the drawing but is
repelled by the remainder of the stone. With a moist stone and regular in supply an almost unlimited quantity of prints can be produced.

The handling of large slabs of limestone and the use of a chain hoist to
locate the larger specimens on to the press made this technique somewhat labour intensive.

A Chromolithograph is produced by the method above but using many dozens of tint stones
to apply the different inks. Each individual stone has to be properly aligned so as to register
with the previous ones, and is a technical feat in its self. This method of printing produces a
wonderful tonal quality and subtle colouring which is very difficult to reproduce with
modern printing techniques. 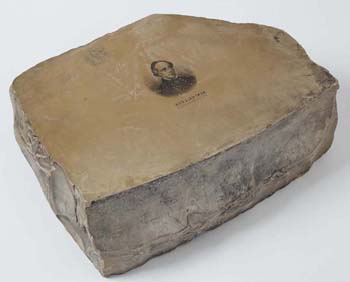 Similar to an engraving, also an intaligo technique. The Etcher prepared the plate by covering it with a wax based 'ground' and the image was drawn in the wax using an etching needle,this technique allowed the artist to produce a much more free and expressive image. The edges and underside of the plate were sealed with varnish for protection and the plate was them immersed in nitric acid. The acid would bite into the plate where it was exposed by the needle producing an incised image on the metal.

After the plate was bitten to the satisfaction of the etcher, it was removed from the acid bath and
washed in hot water to remove all traces acid and the remaining wax. An ink charged 'dabber' was
then used to work the ink into the incised areas of the plate which was then wiped to remove any
surface ink. A piece of paper was then laid on top of the plate and then passed through a
press allowing the ink to be absorbed by the paper and produce the printed image. 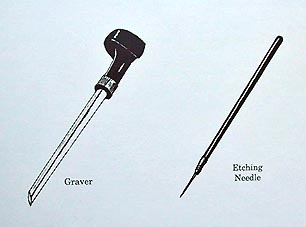