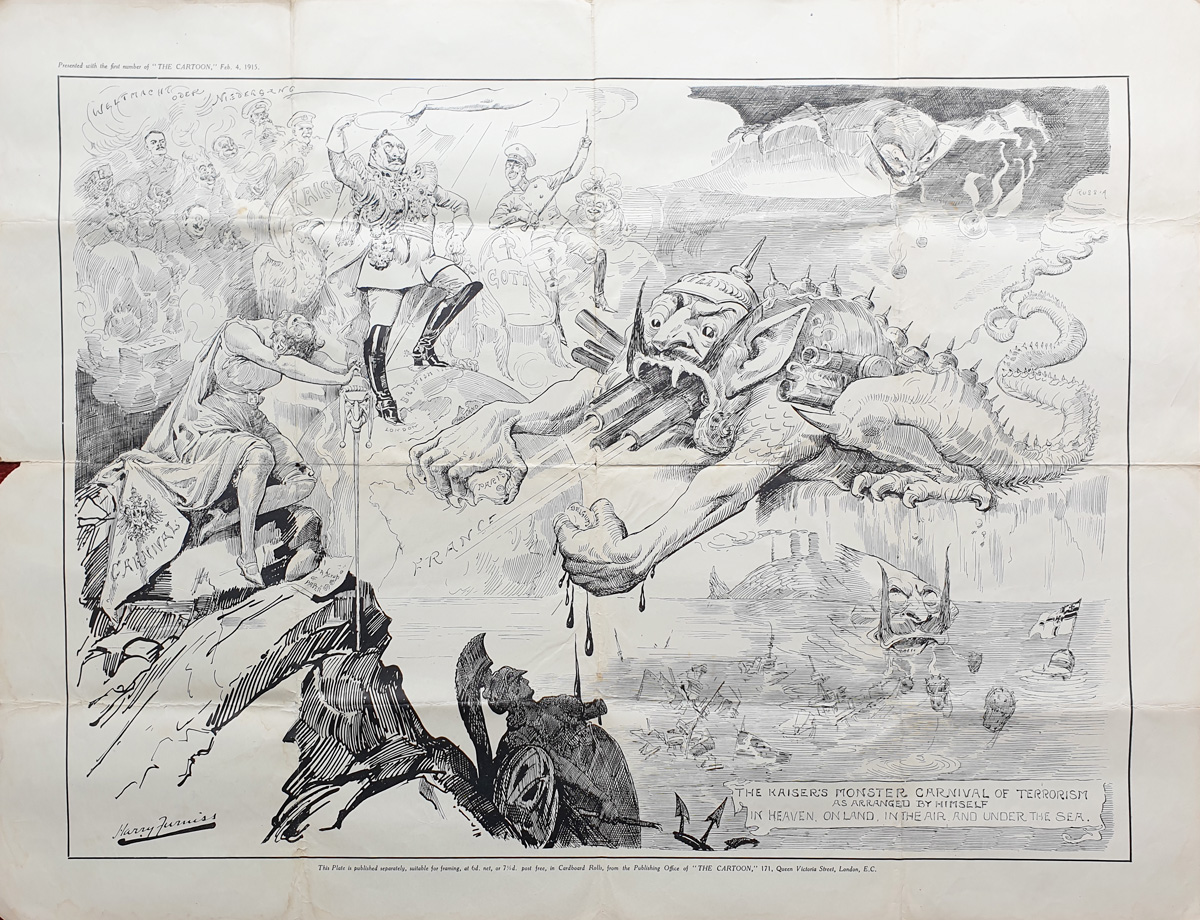 Title: THE KAISER'S MONSTER CARNIVAL OF TERRORISM AS ARRANGED BY HIMSELF
IN HEAVEN, ON LAND, IN THE AIR AND UNDER THE SEA

Description: Inscribed beneath: 'This Plate is published separately, suitable for framing, at 6d. net, or 7½d. post free, in Cardboard Rolls, from the Publishing Office of The Cartoon, 171 Queen Victoria Street, London, E.C.''
A cartoon map from the First World War depicting Germany's Kaiser as various huge monsters, the largest of which grasps Paris and Belgium and drips blood onto Britannia. Germany's military menace is depicted in various ways, an airborne, moustachioed character represents the threat of the Zeppelins, dropping bombs on Europe. A similar fish is seen to be responsible for mining allied ships and a huge Kaiser-like, central monster is firing guns from it's mouth, which represents the might of the German army.

Harry Furniss March 26, 1854 – January 14, 1925
Born in Wexford, Ireland, his father was English and his mother Scottish. He was educated at Dublin’s Wesley College.

His first job as an illustrator was for the Illustrated Sporting and Dramatic News, and when it was purchased by the owner of The Illustrated London News he moved to that magazine. There he produced illustrations of social events such as the Boat Race, Goodwood and even the annual fancy dress ball at Brookwood Asylum.

After some years Furniss moved to The Graphic, initially writing and illustrating a series of supplements titled "Life in Parliament".

His most famous cartoons were published in Punch, for which he started working in 1880, and to which he contributed over 2,600 drawings. He left Punch in 1894 when its owners discovered that he had sold one of his 'Punch' drawings to Pears Soap for use in an advertising campaign. In 1890, he illustrated the Badminton Library's volume on Golf.

On leaving Punch Furniss brought out his own humorous magazine Lika Joko, but when this failed he moved to America where he worked as a writer and actor in the fledgling film industry and where, in 1914, he pioneered the first animated cartoon film for Thomas Edison.