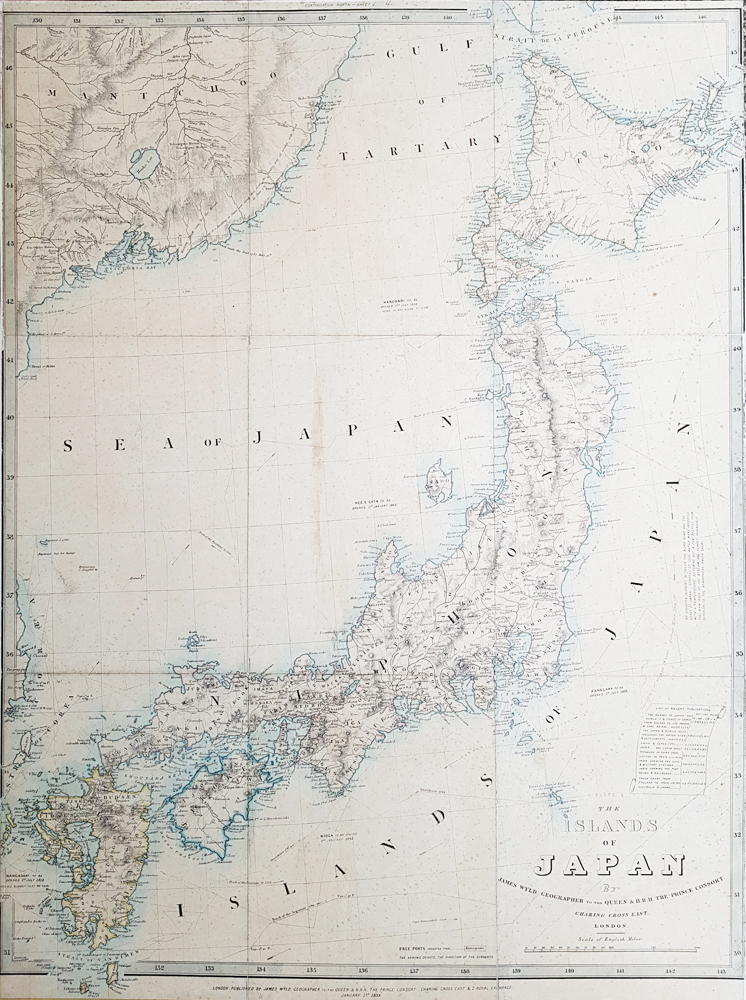 Title: THE ISLANDS OF JAPAN BY JAMES WYLD, GOEGRAPHER TO THE QUEEN & H.R.H THE PRINCE CONSORT.

Description: Extensive, early edition of this map which includes detailed descriptions of the sea currents and a table of recent, associated publications. Very scarce.

Biography:
JAMES WYLD (the Younger) 1812-87 The Wylds, father and son, were highly successful map publishers in London for well over half a century. The Elder succeeded to William Faden's business, taking over his stock in 1823, and from then onwards he, and later his son, issued a large number of atlases and maps, including re-issues of Faden's maps - all noted for their excellence. In turn they both held the appointment of Geographer Royal, and the Elder was also a founder member of the Royal Geographical Society.

Following in his father's footsteps the younger Wyld joined the Royal Cartographical Society in 1830 at the tender age of 18. When his father died in 1836, James Wyld II was prepared to fully take over and expand his father's considerable cartographic enterprise. Like his father and Faden, Wyld II held the title of official Geographer to the Crown, in this case, Queen Victoria. Among his first major decisions was to move operations from William Faden's old office at Charing Cross East to a new larger space at 475 Strand. Wylde II also chose to remove Faden's name for all of his updated map plates. Wyld II continued to update and republish both his father's work and the work of William Faden well into the late 1880s. One of Wyld's most eccentric and notable achievements is his construction of a globe 20 meters in diameter in the heart of Leicester Square. In the 1840s Wyld also embarked upon a political career, being elected to parliament in 1847 and again in 1857. He died in 1887 following a prolific and distinguished career
Other antique maps of Japan